Under the nurturing tutelage of our glorious leader, Chris Samuel, this is a men's singing group capable of lowering the tone and raising a laugh simultaneously in any setting with deep, Georgian-inspired harmonies and serious silliness.

We sing all sorts of material a capella. We create a sound that has been described by several wives as ‘surprisingly good’ and we finish in good time for the bar.

We sing right across, despite and beyond, the musical spectrum from serious Georgian choral pieces, through the odd Wagnerian operatic piece, to less intellectual stuff employing hats and related costumery. Our performances are entirely suitable for all the family. Having said which, some of our repertoire is sung in Georgian and Old German and we're not at all sure what the words mean. Any offence given to Georgians or Old Germans is entirely unintentional and the same goes for Swindon girls, of whom most of us are very fond.
We are a total, unforgettable experience and guaranteed exhilerating entertainment.

We have sung at many venues including + The Roundhouse, Camden + The former Colston Hall, Bristol + The Speigletent, Bath + The City of Derry International Choral Festival (where we were awarded a special prize as the choir that contributed most to the Festival) + Cork International Choral Festival (where we were awarded the P.E.A.C.E. Trophy for the choir that most embraced the spirit of the Festival) + Chippenham, Bradford-upon-Avon, Lyme Regis and Upton-upon Severn folk festivals + Folk East + Bath Abbey + St George's, Bristol + The Chapter Arts Centre, Cardiff + The Platform, Swindon + Stroud Subscription Rooms + pubs too numerous to mention + Bushmills (NI) and Jameson's (Cork) distilleries + the Fleet Air Arm Museum + The SS Great Britain + Stonehenge + The Steam Railway Museum, Swindon + and, with the waves crashing around us, on the Giant's Causeway, Northern Ireland.
We have also sung several songs live on Radio 3 and on BBC Radio Foyle in Northern Ireland!
Some of our activities can be inferred from our Past Gigs Poster Collection. 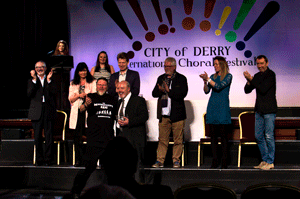 The 2016 Derry Internationl Choral Festival judges awarded us a special prize for the choir that contributed most to the spirit of the festival. We'd been invited to Derry by a wonderful mixed choir, Codetta, whom we'd met and sung with the year before in the Roundhouse, Camden. 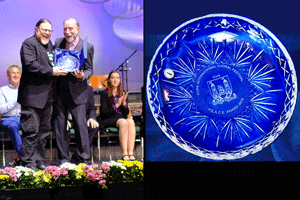 As a result of our success in Derry, we were invited to take part in the 2018 Cork International Choral Festival. Despite participating as a non-competitive choir, festival judges insisted on awarding us the PEACE prize which is an Irish cut-glass engraved bowl. PEACE is a lengthy acronym but essentially acknowledges the choir that has most embodied the spirit of the festival. Chris is shown receiving the prize and inset is a detail of the dish which is still intact and is a treasured memento of our two thoroughly enjoyable excursions across the Irish Sea when we were made to feel very welcome. 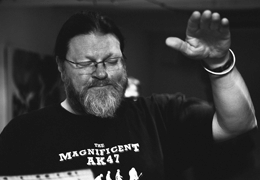 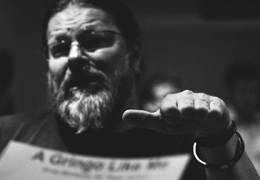 We provide our own beards

We can be booked at the drop of a hat... 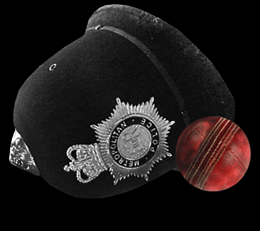